A late recap - Festive 10k and the Bride Elf!

I wanted to find a run that was a little special for my final 10k of 2013 but was loathed to run in a Santa Suit after reading about Leah’s run last Christmas. Fuelling my indecisive nature was that most December runs were 5k or didn’t have a medal (it’s all about the bling for me!)


Leah had arranged a Christmas get together to run the Cafod Nativity Run. It’s an annual run, held on Clapham Common and this year included a nativity toddle, a 5k and new for 2013 a 10k.


The selling point for this race was not only the chance to Run with the Team Naturally Run girls, to meet some of the bloggers who I have been following for the last year or so (although I have to admit that it felt slightly like I was meeting celebrities) but to top it off, Leah has arranged medals for us all, our Team Naturally Run Bling.


Cafod encourage runners to dress in a Festive or Christmas outfit, we saw some amazing costumes including a 6ft Christmas tree. Leah had also arranged a group costume, we were all decked out in matching Elf Costumes, and Lucy’s boyfriend Glen even had a little matching Elf costume! Leah’s costume was adorned with a few extras including a tiara, a sash and wand, as her lovely boyfriend (fiancé) had proposed. 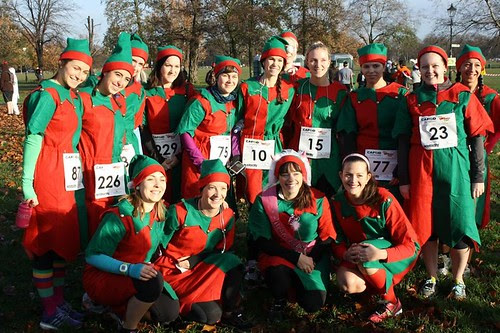 The run itself was a mix of paths, tracks and little trails in the park, I hadn’t realised that it was meant to be shaped like a snowflake! It was a nice run for our spectators as we doubled back several times to the bandstand and it meant Tim and Katy were able to get some great pictures! (the pictures are great, me not so much!) I ran most of the run with Leah, Lauren and Charlie, it was really fun running with a group and in costume, especially as every time we passed a marshal they congratulated Leah the ‘Bride Elf’, I think most presumed it was a Hen Party!


Around 7.5k I slipped back into a slightly slower more comfortable pace, the heavy felt costume was a little much and I was struggling to keep cool at a faster pace.


I crossed the finish line in 1:05:01, I had been beating myself up on the last km and knew I was going to be the last elf to finish, but as I approached the finish line the girls were all cheering and I felt like amazing, it was a new experience to run with a big group and I was delighted to finish, be thrust a hot chocolate, some water and a mince pie before joining the rest of the girls for a group photo, Team Naturally Run won Best Group Costume! 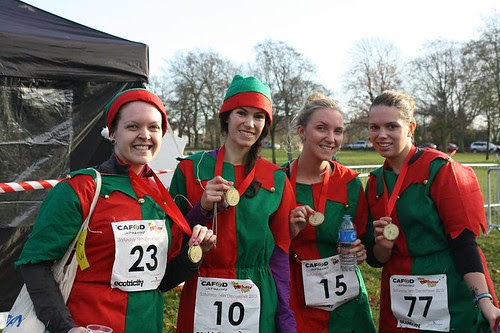 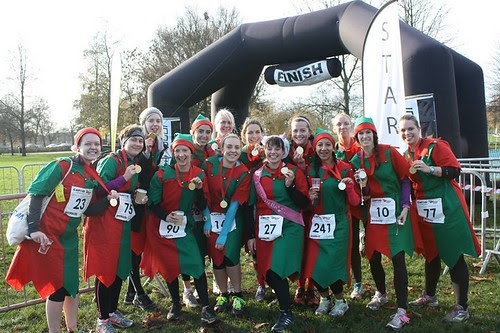 Leah gave us our beautiful medals, and we had a glass of champagne and then onto a little restaurant for a well-deserved breakfast! 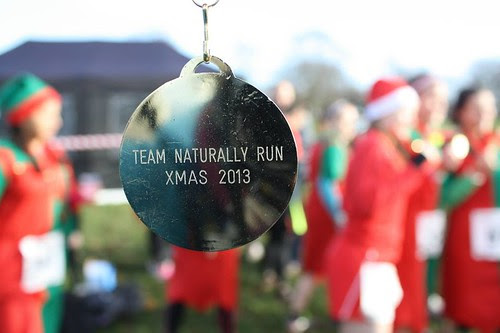